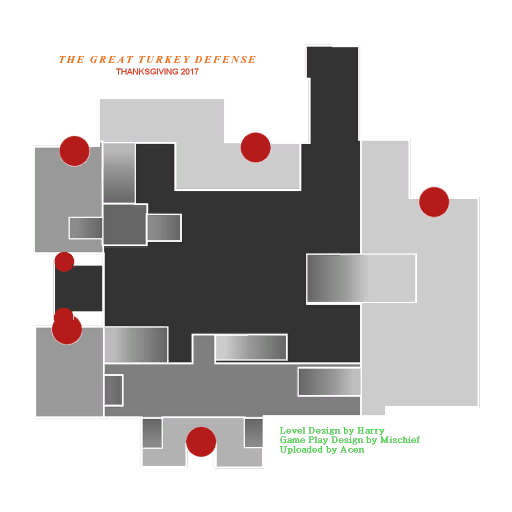 The build requires setup to trap all the Turkeys in the centre. This is done to centralize the build so DU does not need to be split between the big Turkey and the small Turkeys. A video will be uploaded soon and linked showing the setup. What is curerntly showing on this page is the build that I use once I have trapped the Turkeys.

1. Using your Monk, build 1 strength drain and 1 ensnare aura at the designated location.

3. Swapping to Huntress, place 1 gas trap at the designated location.

4. Swapping to Apprentice, fill out the DU with 6 LTs.

1. Upgrade towers with Apprentice as your main character, with Tower Boost as your split. Baby Old Ones will still extact mana from hitting the Turkeys while not doing damage. This is free upgrading and mana.

2. On the second wave, when the LTs and other defenses are upgraded, you can start to Initiate boost on your main character up until the last wave.

3. On the last wave, use a DPS Monk as your main character. Bring in your Boost Summoner and sit it on top of your LTs. Additionally, bring in your builder Apprentice on your last split to get builder bonus.

4. DPS anything that gets close, as well as the bosses. They don't have much hp and will die very quickly.

The Apprentice has an extremely long charge on his mana bomb. In most situations, you can commit to him even if he starts to charge immediately, and kill him in time. Squire and Monk are for the most part harmless, unless they get inside your pen and you do nothing about it. The Huntress does a lot of damage, but stays on the outskirts of the map and is a non-factor.