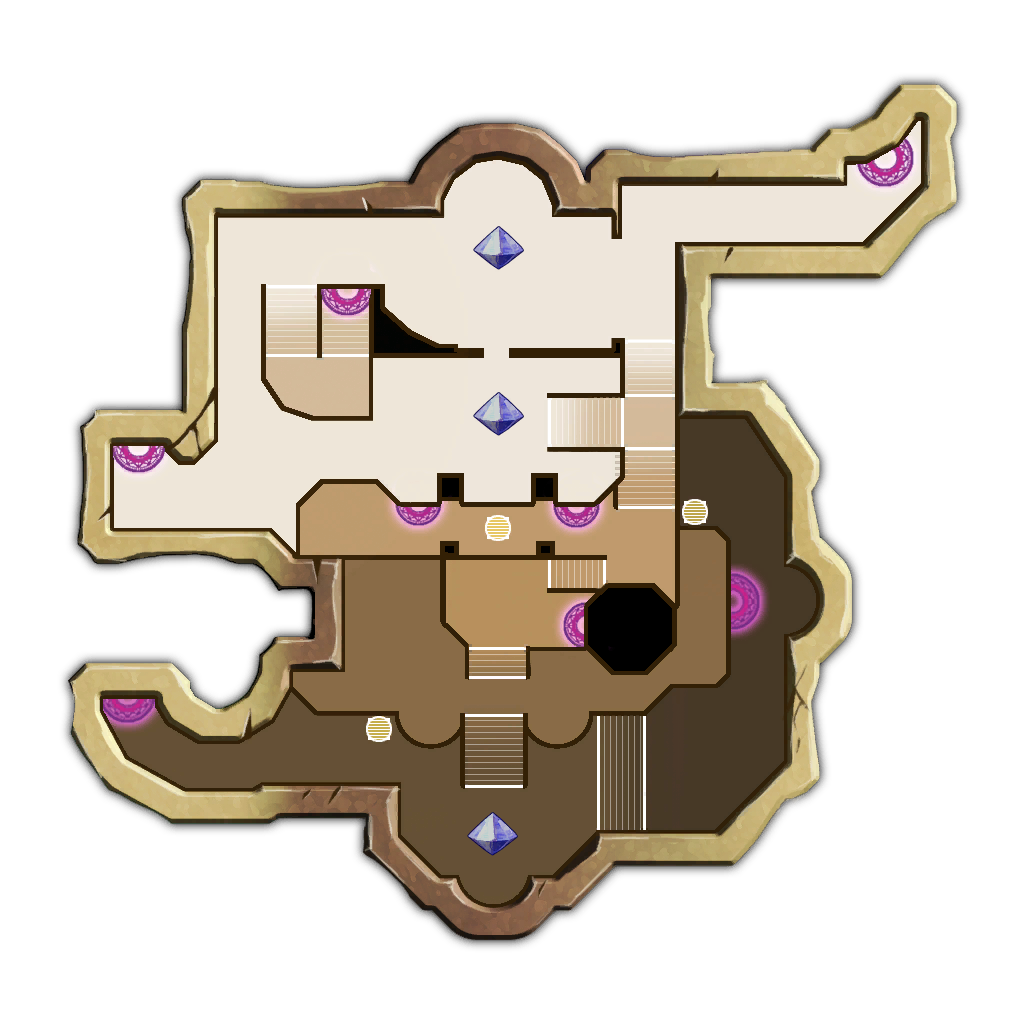 Among my better quality builds, unlike the shitpost tier Ramparts ones I made for wiki purposes recently.

Map Info:
- Intense push of ground based ogres and several copters during the first 50% of the wave.
- Djinns come from south and east. South djinns are not much of a threat. East djinns will often fly up insanely high to the sky for no reason or try to remove towers.
- Mobile mage towers introduced. These are not much of a threat but outside weakening auras, they are incredibly powerful. If you see ANY of them attacking, then you did your gas traps wrong.

LESS STATS VER (Instead of using Guardian Boosters, use a Tower Boost throughout the rest of the run):

Hint 1: Crystals (for reference)
Hint 2: Minion walls. The yellow lines represent the reflection beams.
Hint 3: 2 Stacks of mage towers: 2x DST 2x Fireball and 3x LT. Use Apprentice+Huntress on the DST stack, and Monk+Huntress on the LT stack. Deadly Strikers are facing in the direction of the blue arrow.
Hint 4: This is where spiders spawn. If your auras do not have enough tower damage, theres a TEENY chance the spiders get your mage towers. In that case, place a 2 DU proton beam or shock beam to finish those off.

How to stack 2 different towers in the same stack:
First, place a Fireball tower. Then sell it. In the same spot, build the 2 DSTs as usual. Next, do ALT+8, which spawns the Fireball tower where you had sold it. This method works with other towers.

Make sure there are no gaps in between the orcs. This is very important. Alternatively, if the East Djinns are getting hella annoying, replace the Orcs with 9 Archers on each row. All traps are touching a buff beam. If you are having issues (happens when you have around 3k+ tower range), take some gear off, place the traps, buff beam them, then put your armor back on.

Upgrading - You only have to upgrade the mage towers and buff beams. I do recommend upgrading auras unless you want to constantly go back and forth to repair them. You want at least 5000 aura hp to safely get through the first half of the wave without upgrades (hardest part). I highly recommend starting with your Tower Boost monk to safely get through the early mobs. You will be done upgrading with monk on the first wave anyway.

For the last wave, i brought in a bomber with prop cat and another summoner with 2 mini mechs. Bomb every time djinns get far/you see djinn things beaming/ogres cramming up hard. Better with 2 bombers, i actually recommend bringing in your builder mage instead of that 3rd summoner.

lol i realized what the problem was for most of my other strats: the stuff were too far off the screen and if you couldnt see them unless you zoomed out. fixed this and made everything compact. lmk if this strat is funky, off, etc - just leave me a comment!